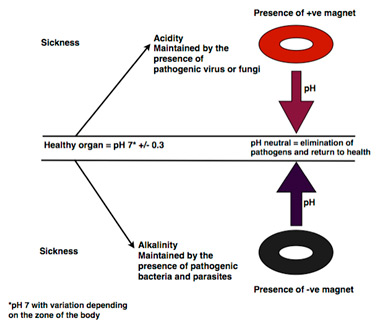 
The Biomagnetic Pair assumes that the body communicates and helps determine the biomagnetic region that is dysfunctional and has been invaded by pathogens, by using a binary dialogue (extension and contraction) taking place between the therapist and the body´s cells.

Based on this principle, the irregular magnetic fields can be modified with the use of magnets to restore both Biomagnetic balance (cellular frequencies) as well as biochemical (pH, neurotransmitters, hormones and enzymes) balance.

This method assumes that most diseases are caused by infection, either micro or subclinical, or by macro or at the manifested level.

The Biomagnetic Pair is a therapeutic system developed by Dr. Isaac Goiz in 1988. This system calls for the use of strong magnets to fight parasite, bacteria, fungi, viruses and other disease causing germs. In addition, it can address organic dysfunction and restore energetic balance and work towards harmonizing emotional states.

The system is based on recognizing the existence of altered energy points within human organisms which, when combined, can cause disease. The surveying of the points is done with passive magnets (those that are not connected to an electronic machine) and which are placed on different areas of the human body, becoming the scanning or biomagnetic scan. Once these areas of the body are scanned and it is confirmed that their energy potential is related to the specific afflicted organs or tissues, the therapist simultaneously places magnets at those particular points for at least 20mins (in Denver CO) - it will depend on where the session is being conducted. A second level practitioner will use bioenergetics to scan the body.

Disease is found in the organs or tissues with unbalanced positive and negative magnetic charges. When this ion imbalance or alteration is corrected, the problem disappears because the equilibrium point has been restored. This is what Biomagnetism accomplishes. Thanks to its force or polarity of the energy, the negative polarity is capable of having an impact on a similar pathological charge, which will cancel out when exposed to the positive charge.


(From the site www.goizbiomagnetism.com)
Powered by